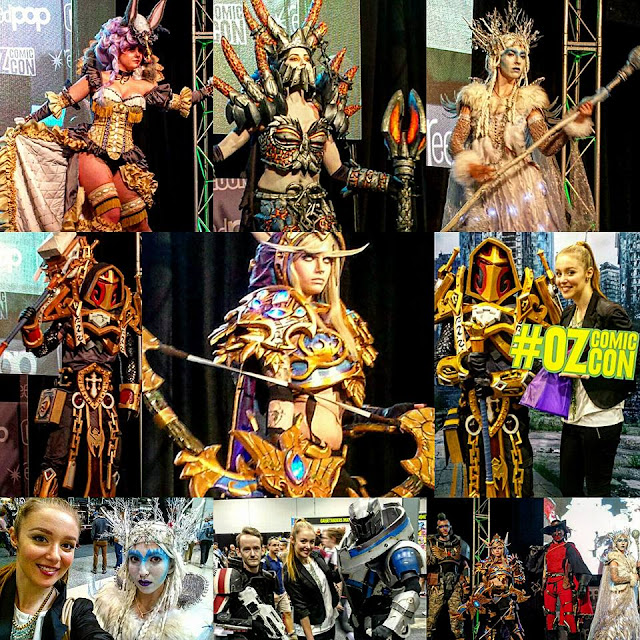 High calibre talent at Oz Comic-Con's Cosplay Championships in Adelaide, 2016! Thankyou for having me as your Cosplay Panel Judge!
💖
It was incredibly difficult as there were so many unique and skillful cosplayers, especially in regards to armour and paint work! 💖

You all deserved an award and it was an honour to appreciate all your hard work up close! Huge fan!

Special mention goes to the overall Cosplay Championships winner for SA 2016 (who now goes to compete in the nationals), Lilla Bee Cosplay for her cosplay of The March Hare, based on the illustration by Sakizou. (Beautiful professional image by Steamkittens, 2016).
The panel and myself were beyond impressed with the level of creativity in problem-solving, the broad skill-level employed in techniques used, fabric manipulation and adaptation and the great level of costume-construction, including a corset and bustle and the regal collar stand on her shoulders!

I had a highschool student contact me regarding Steam Punk Costumes for their Research Project, and thought the conversation here might be worth sharing too!

Is steam punk just dressing up or does it have other meaning to you personally?

To me personally, I think all forms of costuming and conventions are a great form of escapism from our everyday realities. It is also a great opportunity for artisans, designers and people who are wanting to learn more about craft, sewing and visual arts for their costumes.

where was your first steam punk convention/ event?

I have only ever attended conventions in my normal clothing (not in costume), first time at Avcon around 2010 maybe.

Where do you think the steam punk dress idea originates?

From what I’ve heard, they are inspired by the Victorian era and the industrial revolution with many gears and mechanical parts and mechanical limbs! I think there may be a bit of sci-fi in there too somewhere!

How do you think steam punk has evolved?

I think it has the ability to evolve into many styles and cross over into other genres like sci-fi if there’s time travel or bionic limbs, etc! I think steam punk is fairly new though in the last 10 years and has plenty of time to further evolve still.

Do you think steampunk is just a fashion phase or will it continue to evolve?

I wouldn’t call it fashion, it’s more of a cosplay genre, I hope it is not a phase, I think it will evolve given time.

What do you need for a basic steam punk costume?

Your costume needs to be from the Victorian era (1800’s) and I think your character needs an element of inventiveness with the mechanical aspect of steam punk. Maybe goggles, a mechanical arm, and an adventurous spirit!

Do you think steampunk has a broad appeal? Why?

I think it is (like all cosplay) very inclusive to all demographics of people, from all walks of life. Steam Punk doesn’t discriminate based on your age, gender, race, sexuality, disability, etc. I have seen many different people dress up for conventions and it’s all about celebrating the costume and the culture around that which has been built around it and its supporters.

Are you involved in role playing/cosplay activities other than steampunk?

I have unfortunately not had time to create a cosplay costume, but this year was fortunate enough to have been asked to be a Panel Judge at the 2016 Adelaide Oz-Comic Con, for the Cosplay Championships in April. It was truly inspiring to see so many great artisans and their hard work, it was even harder to pick the top 4 winners and then the overall winner! Adelaide has talent!

How is steampunk different from other cosplay?

It is different due to it’s theme which is unlike any other and is it’s own creation. There is a whole pop culture around it, in comic books and video games now. Whereas cosplay is more about creating a costume from an existing character from pop culture, or sometimes making your own costume from a character.


Thank you everyone! Please come say hi on my Facebook Page!
Belinda Zanello: Fashion & Costume
Posted by Belinda at 6:40 PM

Promote Your Page Too

Belinda
Adelaide , South Australia, Australia
Having an artistic mother & seamstress grandmother, it is only fair that Belinda is torn between her love of the visual arts and flair for fashion design. So, having decided she could not have one without the other, she decided to pursue them both and sometimes remove the fine line between them. Fashion & jewellery design, accessories, fashion illustration, styling, costumes & more..